on October 25, 2016
It has been a few weeks since I blogged about Mr. Lego Airman's Air Force journey, and I thought we needed an update. 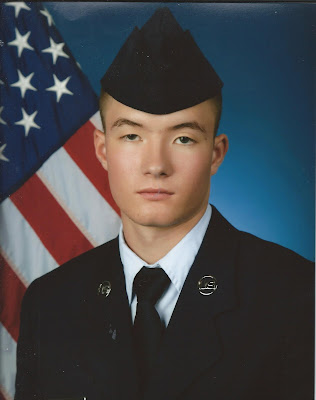 What He's Doing and Learning:

A week after he graduated from BMT he was transferred to his new AFB. This one is also in Texas,  but a bit further north. The first few days were spent in processing. He said there were lots of orientations, or as the airmen called it, Death By Power Point. He also settled into his dorm room, which when he first moved in, he shared with two other airmen. At the time of this writing, one has finished and moved out, so he got the single bed seen below. 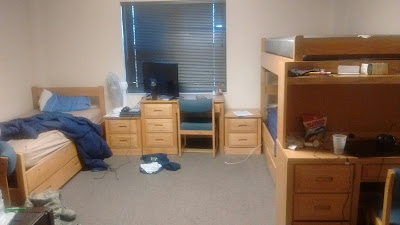 
The next week he began his classes. The main reason he is here is to learn, learn, learn, so they are on a pretty rigorous schedule.

His class day starts at 3pm and goes until midnight. They do get a short break for dinner, but the majority of that time is spent in the classroom. He unwinds and is in bed by 1am. PT is for an hour from 9-10am, and then he has a few hours to do homework and eat lunch, before beginning the whole thing all over again.

The Air Force takes this quite seriously and he is tested regularly (called block tests). There is no room for failure, so two failed tests and you are asked to leave, and not just leave tech school and try again, but leave the Air Force completely. He keeps us updated pretty regularly and last week he passed his first block test!

He does get weekends off and has base liberty - town liberty comes when they have passed all their inspections, at least a month into tech school.


What We're Learning and Doing:

Well, there isn't too much we are figuring out at this point. It has been GREAT having contact with him each day. He usually messages us each morning to tell us how his day went. But only for a short while since he has lots of homework. They are not allowed to take their phones to class so we can't contact him for the rest of the day.

We have also been able to Facetime him, had a tour of his dorm, and seen some funny videos he has sent us.

We still send mail but not nearly as much as we were when he was at BMT. The big thing we can now send is PACKAGES.

We have sent him his laptop, some clothes, fun snacks, and the girls pitched in and bought him a Niners mug. We also sent some "just add water" things since he does have a microwave.....instant potatoes, flavored water packets, instant noodles, soups..... things that, by the way, we usually don't eat here at home.

We have also been exploring fun care package ideas.

The first package we sent, the girls decorated the flaps that opened. Bookworm is going to try to make him some baked goods which should survive the trip. And I found a way to bake a cake in a mason jar, which is a great way to get fresh goodies to him.

There is an extensive list here of other fun things to send.

What's in the Future:

Tech school will go on for a couple more months. As always with the military, dates are never set in stone so the exact timing of things is not known. Because Mr. Lego Airman is a Reservist, he will come back here after his schooling is complete and do some on the job training here, at a local base.

He also has a friend at tech school - his very good friend that lives near us, just graduated from BMT and arrived at the very same tech school. They are in different fields so are seperated during the week, but they can hang out together on the weekends. 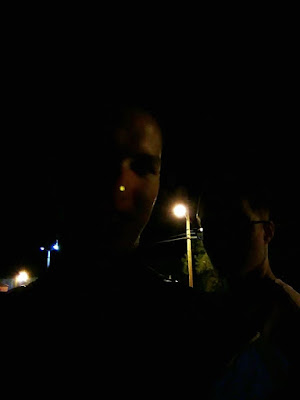 {A horrible photo I know, but here is Mr Lego Airman behind his good friend.
They had just finished a bowling game and were headed back to their dorms}

In the meantime we are praying for him, encouraging him with notes and messages, and are excited for his future.

Thank you for your prayers! As always they are appreciated. If you feel compelled to send him something, let me know and I'll share his address with you.