on June 02, 2011
This year's fair was pretty good. We had a couple of disappointments (just like in life) and some victories (again, just like in life). That is one of the reasons we do 4-H; to give our children a taste of real life. Of the unfair moments, the unexpected problems, the joyous celebrations when ribbons are handed out, and the fact that the harder you work the better you do.

First off was the market competition at the bright and happy hour of 8am. If you remember, we knew we had a very low chance in doing well in this competition - our little rabbit Uno had no tail.

You can barely see Bookworm below, and Uno is the one rabbit in the cages that does not have a black nose. (He is a New Zealand rabbit, and the rest were Californian's.) 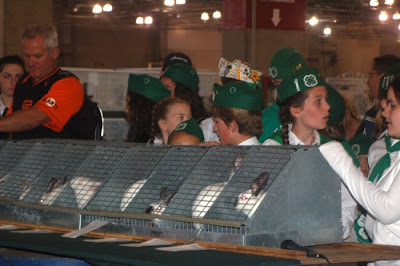 The judge didn't miss a thing and disqualified our rabbit right off the bat; but he did say that the mother probably bit the tail off when she was delivering her and that it was not a genetic issue. This is good news, because now we can either sell her or use her as a breeding rabbit.

The next competition that day was showmanship. FFA (Future Farmer's of America) members go first, and we waited for all 47 of them. 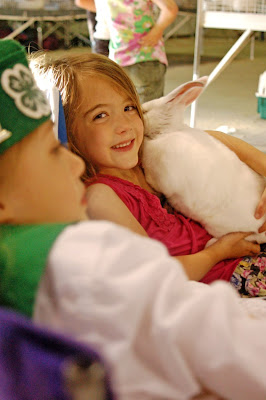 Patience is definitely a virtue during rabbit showmanship.

7 hours later, the Junior 4-H members were up.

Here is Mr. Lego on the left, with Dasher and Bookworm a little further down. 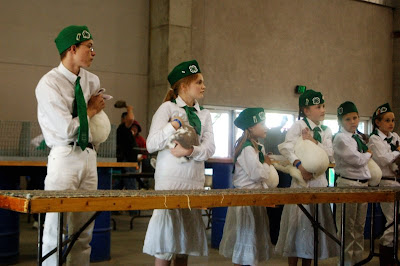 The children did their showmanship routine under the watchful eye of the judge. 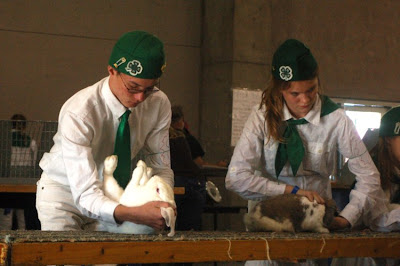 Next came the questions. Another life lesson: staying calm under pressure. This judge was nice, but had some hard questions to ask them. 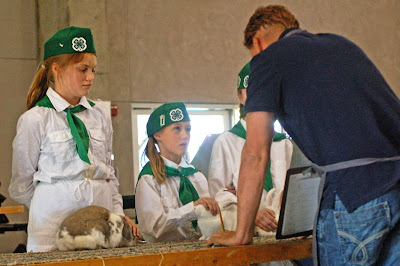 There were about 25 Juniors that went up, and after the last table they did callback. Both Mr. Lego and Bookworm got called. 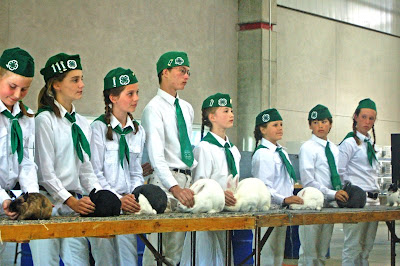 Another lesson learned: how to handle disappointment. Dasher did okay with it and vowed to study hard for next year. Sitting with Grandpa always makes things better. 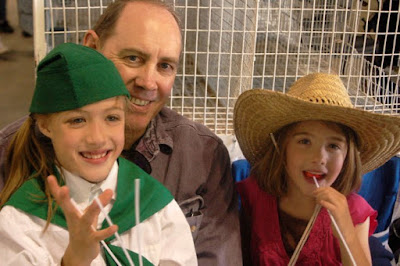 After going over the showmanship routine again with another round of hard questions the ribbons were passed out, and Mr. Lego got 6th place in Juniors! 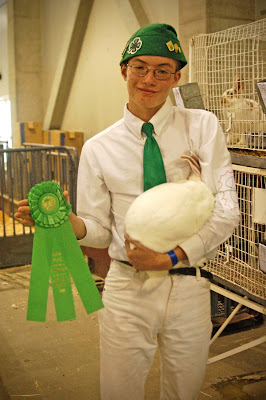 This was only the first day; and we didn't leave until 8:30pm.

The second day was the breed show. I didn't get my camera out that morning but the two older children were busy on the ramrod committee -  they brought each and every rabbit up to the table so the judge can see which rabbit in each breed is the best.

Our Thelma Lou was judged the best in the New Zealand breed. Then the judge looks at the top rabbit in each breed and picks the very best.....and Thelma Lou got reserve in show! Basically this is second place in the entire fair.....a very special award. 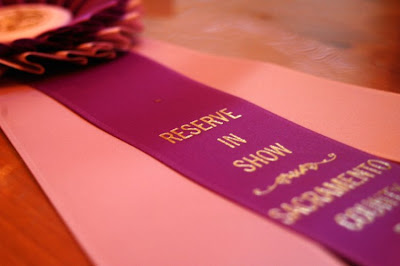 After all that excitement it was time to hit the rides. 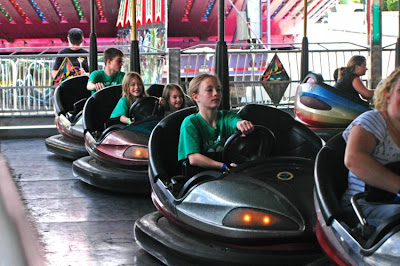 I think the bumper cars was everyone's favorite. It was pretty dead during the day and so the kids would get off, run around to the front, and make it on for the next ride. 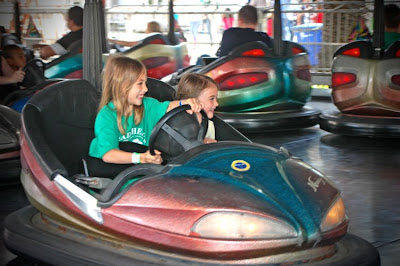 Here is Mr. Lego with his friend. 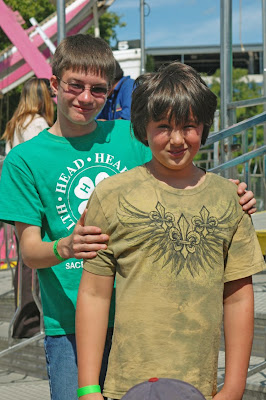 A great thing about our fair is that you can bring in outside food so later that day, my Sweetie brought pizzas in for us and all our friends. 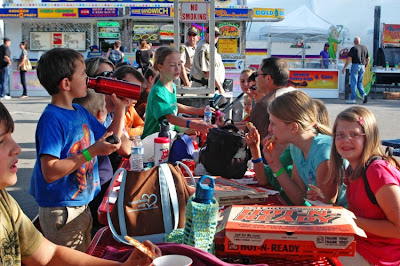 This was another late night.....we were on the rides until 10pm. 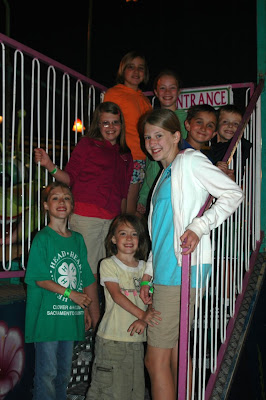 The next day was not a fair day for us but still a 4-H day as we attended State Field Day. Mr. Lego and Bookworm had qualified to give their presentations at the state level so we went out to UC Davis that morning, they gave their presentations, we all headed back home, and I took a nap.

The next day at fair was Rabbit Bowl. For this competition the kids are on teams and play a rabbit knowledge game.

Here is Bookworm's team; these girls did really good and ended up in 4th place. 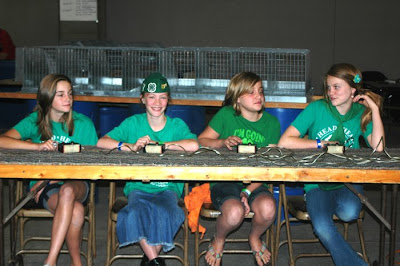 Mr. Lego had a harder time getting a team together, but at the last minute found a primary (4-Her under age 9) to be on a team with him. 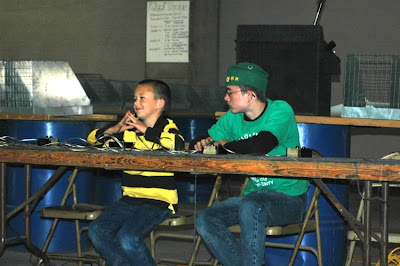 They did very well and got 2nd place.

In between our rabbit obligations, the children would get their rabbits out and bring them to the table for people to pet and ask questions about. Another life lesson: speaking to strangers. 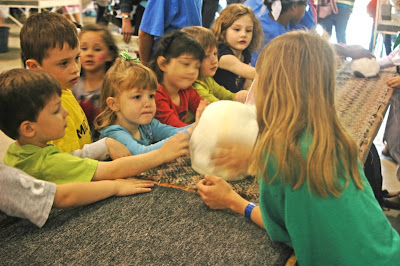 Our last day at fair we went to the awards ceremony and then Mr. Lego helped check all the rabbits out.

I am thankful that no one got hurt, that we had wonderful family and friends that came and shared the time with us, but especially for all the many life lessons that were learned. 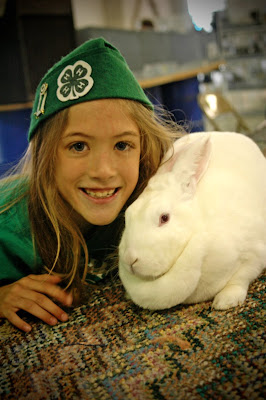