on February 25, 2010
I started subscribing to Martha Stewart's Living when I was first married in 1996. I really love a lot of her stuff, even though it can definitely be over the top. I stopped subscribing around 2003; I had to choose between a Cooking Light or Living subscription, and I figured I would benefit more from a cooking magazine at this stage in my life. But I did keep all my back issues which have been fun to look at every now and then. And that is where I got the idea for the braided rug. It is so simple that anyone could think of it, and it is a great use for those old towels that everyone has in the back of their cupboards. Because I wasn't sure how this would turn out, I started with 3 old towels, chosen for their colors; one was white, one was light pink, and another was a bright pink, 70's pattern. (These towels were actually part of a huge stack that my grandpa gave me when he moved out of his house and who knows how long they had been there.) 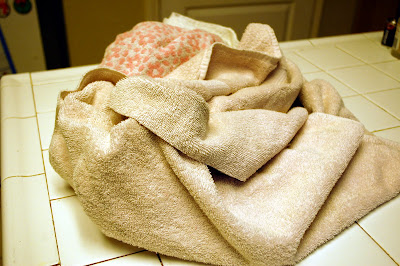 I then took each towel and cut them into 2 inch strips vertically (the shorter way). 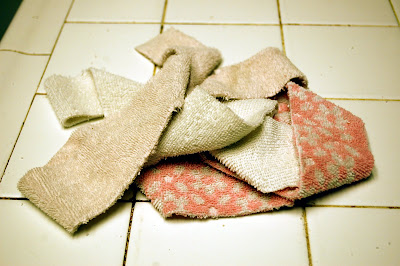 Then I folded the strips in thirds, pined them and then sewed across the long top edge to close them and to keep them from fraying. I didn't get a picture of the strips after I sewed them but you can tell how they looked below. After that step, I began to braid the 3 different colored strips together. 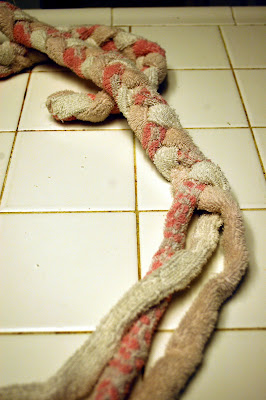 After I had a couple of feet of braids, I started to make the rug. I began with a very small circle that I sewed together, then just continued to work my way around, sewing the edge to the circle as I went. 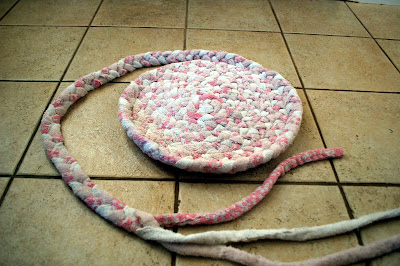 I found that I had to repeat all those above steps numerous times; it is really hard to braid when the rope you are braiding is 7 feet long. Here is the finished rug: 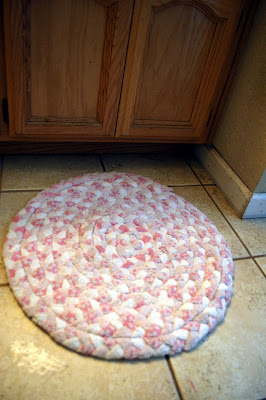 It was a bit smaller that I thought it would be; it is only about 2 feet across. But it is nice and fuzzy on the feet and I love the homemade look of it. Maybe it would look better over here: 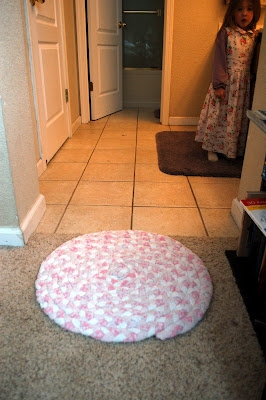 I am planning to do another one and try to shape it into a rectangle to replace that purple rug you see in the picture above. We bought that one when we moved into our house 10 years ago (!) and it has definitely seen better days. Estimating how many towels to use is hard; I bought 6 towels that were on sale at Wal Mart a couple weeks ago for my next rug but now I am thinking that won't be big enough. This project was perfect for me; I love doing something with my hands in the evening when things are more quiet and this hand braided rug was easy and fun to do.
Crafts