on April 09, 2019
I was recently given the opportunity to review another book from YWAM Publishing. I received the book Alan Shepard: Higher and Faster from their Heroes of History series. I also received the accompanying unit study to use as well. 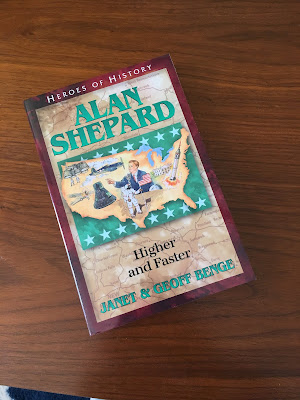 All of the books in this series are written by the husband-wife team Janet and Geoff Benge. Their style of writing is very engaging, and is perfect for a read aloud book for elementary, and independent reading for middle school and high school. I have found that their books are very accurate and give good details in a biographical fashion. This one is 228 pages in length.

Alan Shepard has an amazing story. He attended the Naval Academy and then served on a Destroyer during World War II. After the war he became a pilot and then after flying in the Caribbean and Mediterranean Sea, he became a Navy test pilot. In 1959 he was selected to go through the Project Mercury selection, and he became one of the Mercury Seven. Two years later he became the first American to go into space.

He was not done with the space program and desperately wanted to get into space again, but being diagnosed with a disease of the inner ear prevented this for a few years. During this time he became the Chief of the Astronaut Office and was responsible for training other astronauts. Five years later, a cure was found for the disease and he underwent treatment, which made it possible for him to go into space once more. He became a part of the Apollo 14 crew, and was the fifth man to step on the moon.

But the book does not end there, and continues through the rest of his life, as he becomes a delegate to the United Nations, begins a foundation for needy children, and writes a book about the Space Race. He was diagnosed with Leukemia, and passed away in 1988.

But reading this book was only a part of this review. I also received a downloadable unit study that accompanied the book.

This Unit Study was quite extensive. It is divided into different categories.

Quotes: This section has quotes from famous people during the time period of the book. These are perfect for memorization, copywork, or to create an art piece with.

Display: This section gives many ideas for making a display about the book. Most of the suggestions are photos of the different aircraft Shepard flew and other photographs and maps.

Questions: Listed here are six comprehension and thought questions for each chapter. Many of these dive deeper into the story, and have the students evaluate parts of the story. For example, students are asked about the controversy of sending an animal into space before man, and if they feel that decision was justified.

Student Explorations: This section gives even more things to assign your student: creative writing suggestions, essay questions, hands on projects, and audio/visual projects. Some of the projects here were making a rocket, making a map of the moon with longitude and latitude, and re-creating one of videos made by men who walked on the moon.

Social Studies: This was a great section, and has some really good suggestions of things to do. You can map the journeys of Shepard as he goes from The Philippines to the Caribbean with the Navy. There is a list of vocabulary words that you can assign your child to look up, and even a timeline to fill out. One thing I appreciated about the things in the lists was that the page number was listed, where either the location or vocabulary word was found.

Finally there is a section of exploring related things and ideas for a cumulative project. There are also lists of resources at the end of the unit study.

As you can see, you can easily find enough things to fill a semesters worth of work to do. I appreciated the depth of ideas in the unit study and found that it covered many areas of study. The only thing that I had a hard time with was that all of the activities were listed by topic, not chapter. I needed to go through each section and choose which things to do. I do wish that the unit study had every activity listed by chapter, so I could see at a glance all of the things I could do as we moved along in the book.

We decided to read the entire book through the month long review period, which had us reading six chapters a week. I would basically read for 20-30 minutes, and then I would pull up the Unit Study and orally ask the chapter questions. 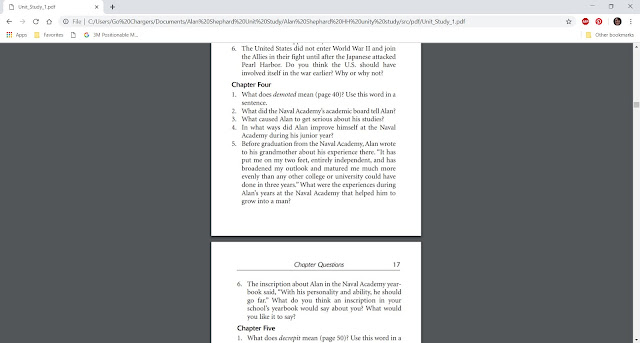 The suggestions in the unit study helped me come up with things to look at online. We spent some time looking at photos from Shepard's life. I found a few of him in the Mercury project, and then we hit the jackpot when we found actual footage of Shepard on the moon, complete with audio. 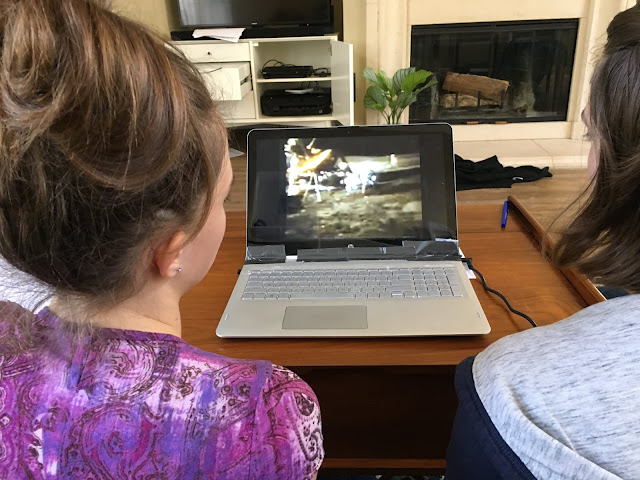 The girls got a kick out of the fact that Shepard was the first man to tee off a golf ball on the moon. And we watched the footage to prove it!

This past year we did world geography in our homeschooling co-op, so I chose a few of the geography activities from the social studies section. Here, Nutsy has drawn where Alan Shepard went throughout his life. 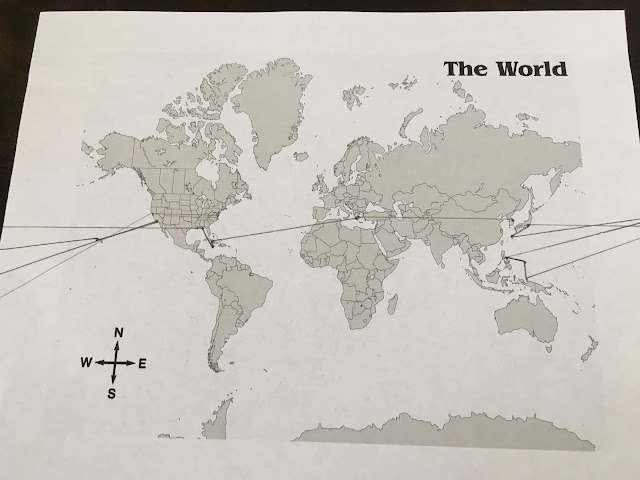 And here she drew lines to the places where Alan Shepard moved to within the United States. She thought it was very interesting that it formed a rough triangle. 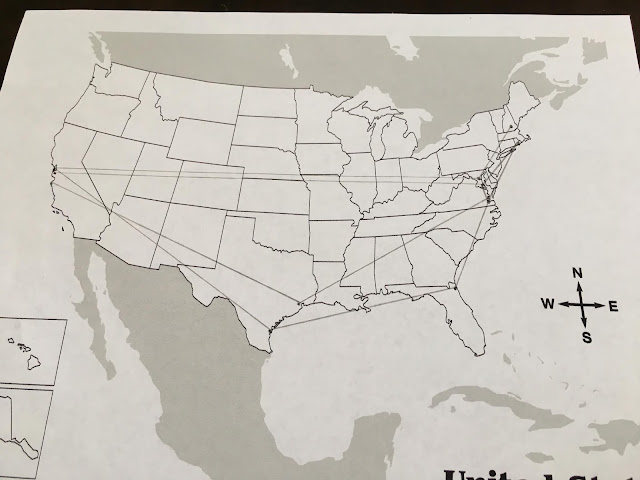 Both of these maps are in the unit study and can be copied for use.

We really enjoyed learning about this hero. Being the first American in space is an amazing accomplishment. Even through his initial disappointment of being grounded, he persevered and continued to work in the space program. His discipline was rewarded after he was able to return to space, and actually become one of the few to walk on the moon. Through the activities in the unit study, this story came more alive for my girls.

This is the third YWAM Publishing book I have had the privilege to review, last year we really enjoyed learning more about Corrie Ten Boom, and a few years earlier, we read Christopher Columbus.

And other members of the Homeschool Review Crew read other books from YWAM; check out what they thought by clicking below.