BMT is officially 8.5 weeks long, but beginning a few years ago, they changed graduation from WOT 8 to WOT 7. So Lord willing, he will graduate in a week!

This week is their evaluation week. They will be evaluated and inspected in their drill movements, uniforms, and weapons. They will also do their final PT test and be timed in their 1.5 mile run, and see how many push-ups, sit-ups, and pull ups they can do in a minute. They will also have their End of Course tests, which are written exams from their classroom sessions they have had over the last 6 weeks. 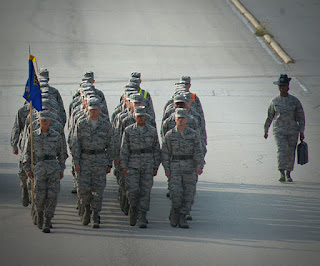 
That's a busy week, and one that can be stressful. I knew this last week, so my letters that I sent to arrive this week were very encouraging and I hope, inspirational.

Also, this week we get another phone call. When that will be you never know, we have not gotten one yet and the suspense is killing me. This is where I am thankful for my AF Wingmoms group on Facebook - we have been encouraging one another this whole week. And in WOT 4, our flight's Facebook page lit up like crazy with notifications when their flight was allowed to call, so I am watching Facebook too.

You can see a video about his week here.

We are learning more about the significance of some of the ceremonies at graduation.

At this ceremony, the airmen in their blues, and are presented with the Air Force Airmen's Coin. This coin signifies their membership in the Air Force and their being a member of the Armed Forces. At this very important moment, they are no longer considered trainees, but airmen.

Coins began to be given out by squadrons in both the World Wars, and since then, have become a common tangible item for squadrons to pass out to their members. These  coins are called Challenge Coins, and are given out in all branches of the military. 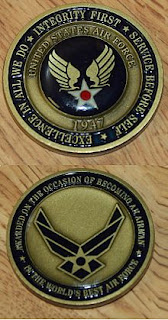 Tap Out will happen twice during WOT 7 - after the Coin Ceremony and after the Graduation Parade. Basically, Tapping Out is an orderly way to release the airmen. To tap out your airmen, you can literally tap them, or give them a quick hug. Whenever you touch them, they know they are then released from attention and can move freely. At both of these Tap Outs, the airmen are free for base or town liberty.

This week I organized my Grad week binder. I got this great idea from AF Wingmoms and love being organized in this way. Graduation at BMT is not a one time ceremony like a high school graduation - this is a 5 day-long schedule that has numerous events that we need to attend. There are also specific rules as to what he can and cannot do, places that we can go, and suggestions for base and town liberties. Plus maps (Lackland AFB is huge!), instructions, and other info. 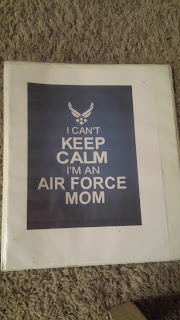 Yes, this is the front of my folder. Over the last couple of weeks I had been printing off lots of info from AF Wingmoms, so I sat down and organized it so that I can quickly look up information. I love being organized like this and would highly recommend this for anyone going to BMT.