on October 06, 2013
14 years ago, I was expecting my second baby. (You were actually my third pregnancy; we lost an unknown soul a few months before.) 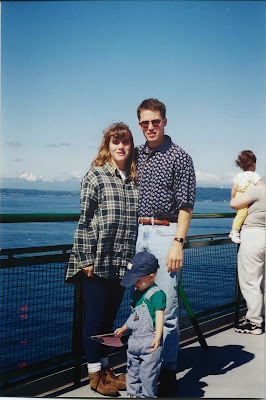 {Yes, I am actually 5 months pregnant here...we were visiting Obachan
in Seattle the week before I went on bedrest}﻿


14 years ago in July, I went into the doctor for my 20-week ultrasound.

My pregnancy had not been completely normal; At my first ultrasound at 6 weeks they couldn't see you at all, and so they told me they wanted to terminate the pregnancy. I asked them to wait and a week later at another ultrasound, you were big enough for them to see on the monitor.

So right from the beginning we could see God's merciful grace and providence. I had had spotting here and there, but for the last few weeks things had calmed down.

At the 20-week ultrasound, we found out that you didn't have barely any amniotic fluid. (The nice, cushy stuff that you lived in.)

So we met with a specialist, who was able to get a teeny bit of fluid from my uterus to see if he could help with what was going on. I went on pretty strict bedrest...only getting up to go to the bathroom and to take a 5 minute shower.

As the weeks went by you were doing okay....the fluid was coming back up a bit and not as dangerous, but I had to make sure I didn't get up at all.

Every 2 weeks we went in for growth ultrasounds, and then at 28 weeks I started getting steroid shots to help you with your lungs.

14 years ago, in mid September when I was 30 weeks along, you were still hanging in there, but your growth was slowing. I was now going in for ultrasounds and non-stress tests twice a week.

One time, the fluid went below 3cm again, so they actually put me in the hospital for a few days. On the fourth day they even kept me from eating breakfast because they were sure you needed to come out, but the fluid went up to 5cm, so your birthday wasn't September 23.

Finally, on October 4th, we had an ultrasound that showed your growth in the last couple of weeks had stopped. The specialist decided that you would probably do better if you were born so they told me to come in two days for a C-section. 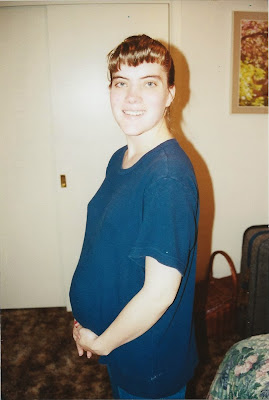 {Me, the night before you were born}
﻿
You were seven weeks early.

14 years ago today, the very same doctor that delivered me, delivered you. And in the same hospital, too. 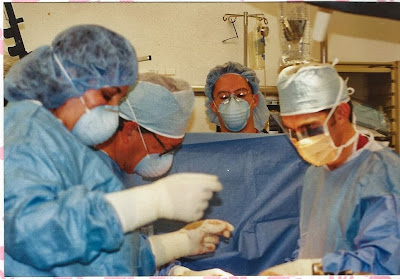 {See dad? He loved having a front row seat to the surgery.}
﻿
You were 2 pounds, 13 ounces and didn't need any help breathing. 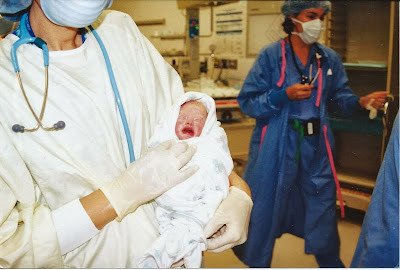 
You were so tiny! You were only 14 inches long. Dad put his fist, right next to your head, and they were the same size. 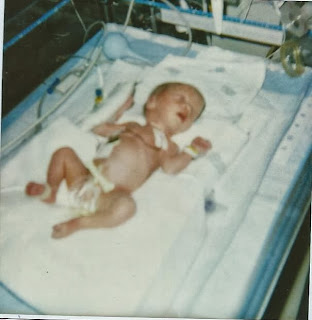 I was so glad you were healthy, and had none of the problems that the doctors had predicted you could have had, with the low fluid. 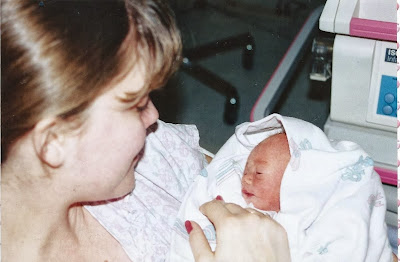 {This is one of the first times I held you....we put a blanket over
your head because they had an IV in there.}
We settled into a routine. Every morning I would call the NICU to see how your night had gone. Then every evening we would drive the 20 minutes to the hospital. Then we would spend an hour or so there, helping to feed you, holding you, and savoring each precious moment with you. Sometimes on the weekends we went twice a day...all of your grandparents and some of the aunts and uncles were able to come in and visit you too. 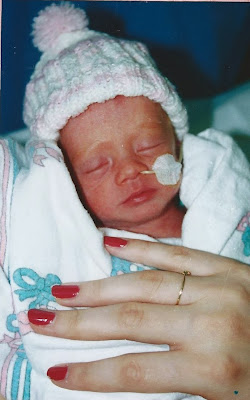 One neat thing about the hospital we were at was that siblings, who were not sick, could come in too. Your brother loved coming in and seeing you. 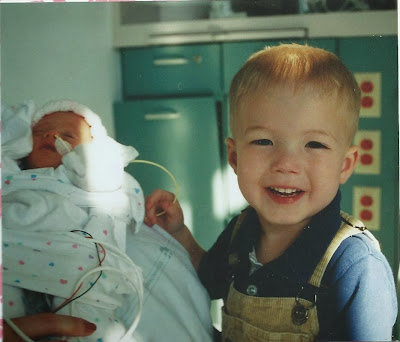 Your NICU stay was pretty uneventful; you did have some trouble eating and you would spit up a lot, so many times after you ate we couldn't hold you.

In late October someone made all of these bright orange hats for all the preemie babies. You were still needing some help with eating and we were waiting for you to hit 4 pounds so you could go home. 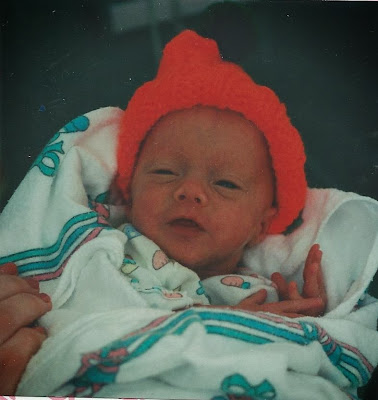 Finally, on November 9th, you were big enough to come home. 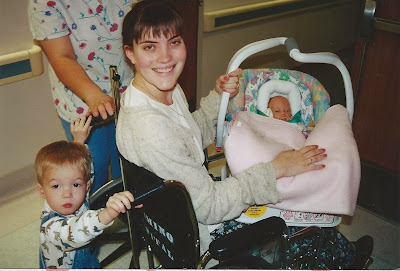 I was so thankful, not only that you were now home with us, but also for the many lessons that God taught us during those hard months.

Through my pregnancy, I had had 17 ultrasounds, 8 steroid shots, 10 non-stress tests, and we went back and forth to visit you each day for 36 days. So worth it, when I would see you in our home, in your dad's arms. 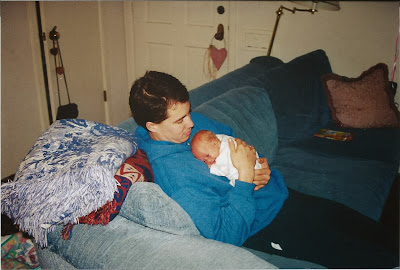 And now, look how you have grown. 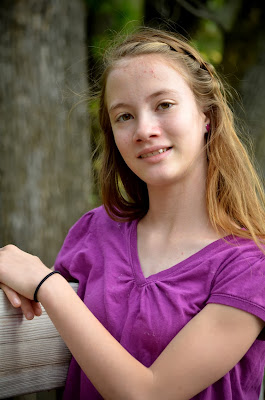 You are turning into such a wonderful and sweet young lady.

"For I know the plans I have for you, declares the Lord, plans for
welfare and not for evil, to give you a future and a hope."
~ Jeremiah 29:11﻿
Birth Story Bookworm My Musings