And I thought it would be the perfect time, with all the extra hands, to make a gingerbread house from scratch.

The walls, roof, and of course, real sugar-glass windows.

First we drew and cut out a template on a paper bag. (I forgot to take any photos until we were actually assembling the thing so you'll just have to bear with my words only.)

I did a super easy template, 4 sides and a roof; with each side being identical to the one it was parallel to.

Then I made a standard gingerbread recipe. I realized when I was mixing the flour in that I had to chill the dough for 2 hours, so I threw it in the freezer for 45 minutes and called it even.

We rolled it out and cut it using our templates.

Mistake #1 - I neglected to make sure that my template would fit on my baking sheet.

It went into the oven anyway, with the peak of the wall contorted to fit the pan. (That part eventually fell off, but as you will see, this was the least of my problems.)

Mistake #2 - Anything structural needs to be the same thickness, or else it will burn and be unstable-see photo below.  (Do you know how hard it is to roll out dough to the exact same thickness?!?)

Next we made our sugar-glass windows. (Which was the easiest, most satisfying, and equally delicious step of the whole process.) Super easy.


This was a two day process, so the following day we started the assembly.

We frosted the windows to the walls, and stood them up.

Mistake #3 - The walls must be perfect. As in to the centimeter, completely identical to the one it is touching and facing. I didn't take close up photos, but we had one side that had a big, 1 inch gap that we had to fill in with royal icing. 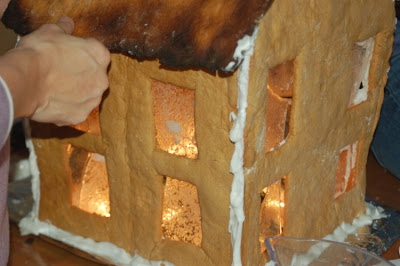 Here you can see my burned sections of the roof. That was okay; we were planning on frosting them, then lining them with Chex cereal to look like shingles.

This was where my creativity got too creative; I had decided to make a hole in one side of my wall and run a string of lights into the house so it would look all nice and homey. 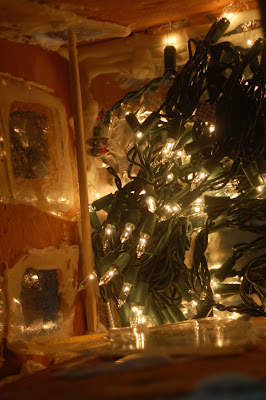 As soon as we got the four walls up, we put the lights in and turned then on; which made it much easier to see what we were doing.

After about 10 minutes things started happening. 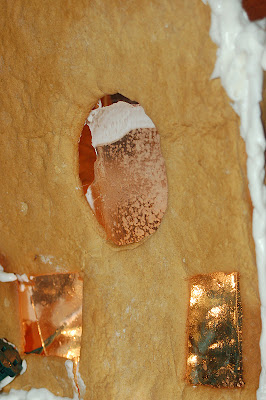 Then the roof would not stay on. It was hilarious; as soon as one crack would appear we would mortar it up with royal icing, and then another one would appear on the other side.

Finally it hit me: You idiot, the lights are melting everything!

We turned off the lights, made repairs, tried our best to prop the whole thing up with chopsticks, and left it on the table for a couple hours to rest. 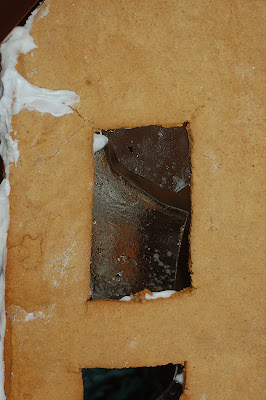 I was not happy on the inside; I had visions of a Martha Stewart, award winning, gingerbread house dancing in my head, and now the whole thing was literally sliding off the table. But the kids were the ones with the good attitude. First they said it was a half built house, and the people inside were poor and could only afford 30 seconds of electricity every hour. Then when a window cracked, they put a chopstick through it and said that the kids who lived there were playing outside and hit the window.

We finally decided a cardstock paper roof was the best; I got out the rest of the royal icing and the candy, and let the kids go to work. 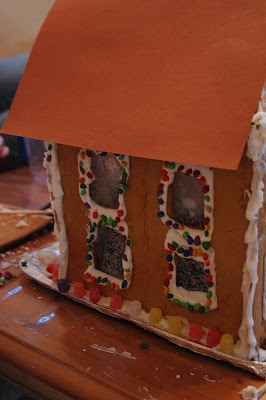 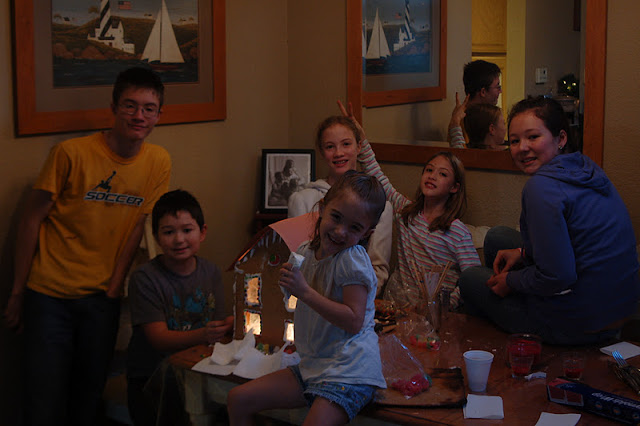 They did a fine job. 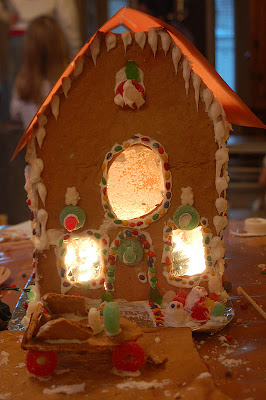 They even used the scraps from the roof to make a car to go along with the house.

Later that evening the house did start leaning...we propped it up with more chopsticks.

Now the kids were saying this house was in Florida, and that it was hurricane season.

The next morning it was surprisingly still up, but that afternoon at co-op during our geography lesson, one whole wall collapsed onto the floor.

That was it; the end of our beautiful house. It lasted 19 hours.

I had planned on waiting until Christmas to eat it, but who wants a half erected gingerbread house on their table for two weeks?

And my little creators had been dying to partake of the yummy house ever since we started, so that night I let them all dive in. 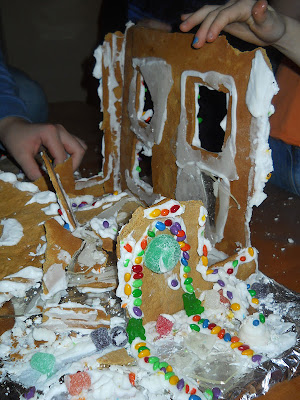 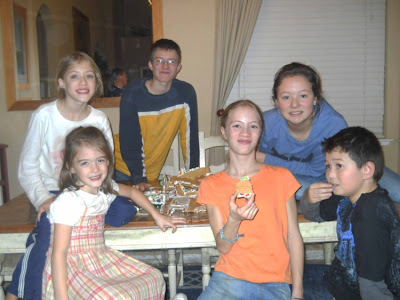 After a half hour of indulgence, this is what was left. 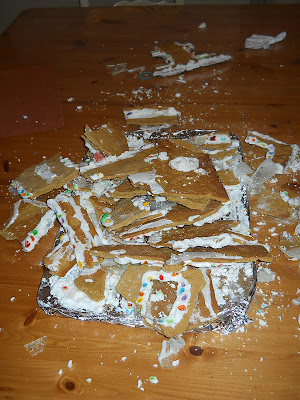 That is also when I realized that it is just as much fun to not make the perfect gingerbread house.

Joy is not based on circumstances, but on our attitudes. And I am so glad that is the truth; or else we would all be walking around moping in our troubles. Having joy is also a choice; one that can definitely be hard to make sometimes. 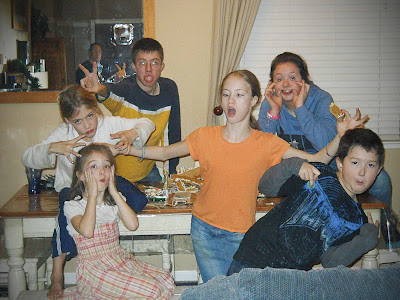 Even with a fallen down gingerbread house, joy.
family Fun Times In the Kitchen Journal Entry My Musings