Our family is trying to eat better. We try not to eat anything processed, we don't eat much refined sugar and we really try to eat lots of vegetables and fruits. I also try to get certain things organic (the top 12 veggies are here). So when my friend asked if I would like to join in on raising a couple of meat pigs, I jumped at the opportunity. She was getting two of them and so I went in on a 1/4 of a pig.

Last November I went out to visit them; one we named Chalupa (after my favorite pork dish), and then other one went unnamed. I secretly named it Carnitas; I didn't want to get too attached to the little buggers and I love Pork Carnitas. 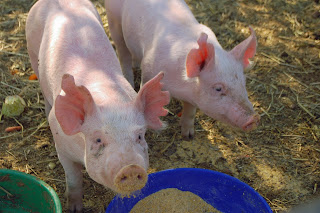 I'll bet this is Carnitas. 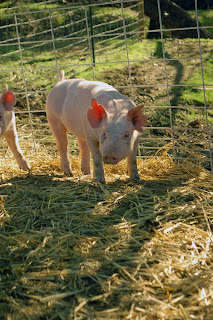 My friend has the advantage of having land the piggies could graze on; specifically acorns, and they also had lots of fresh milk from her milk cow. We did all go in to buy them feed; and this was where it got interesting. We were going for organic pork. But the problem is this: the food you buy at any feed store is definitely non-organic when you look at the ingredients. For us to feed them truly organic feed would have raised the costs significantly. So we decided to have them graze as much as possible and supplement with normal piggy feed.

I didn't make it out to her ranch for anymore piggy pictures, but in February she fenced them in and started monitoring their feed. They were butchered in early March, each weighing 250 pounds! A week later I went to pick up my meat. 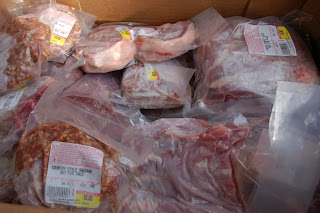 I got about 30 pounds of meat; most of the cuts we got that week, but we did get some ham and bacon a few weeks later after curing. This included spareribs, Italian and Country Style sausage, pork chops, steaks and roasts.

The first dish we made that weekend was our Sunday breakfast: Scrambled Eggs with Country Style Homegrown Sausage. 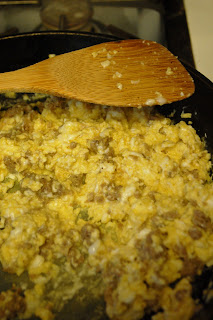 I had been warned that the meat would be different than store bought pork; it would actually be much leaner. So when I was browning the sausage for our breakfast, It was nice to find there wasn't really any liquid fat in the pan. No more spooning out that disgusting fat! Even though it was lean pork, the pieces of sausage were still very moist and had the normal pork flavor. 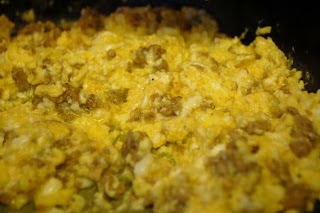 Now the cost: I spent a bit over $120 for my part in these little pork babies. That equals out to be about $4 (average) a pound for almost organic, homegrown, great tasting pork. Is it worth it? I don't know. I love knowing exactly where the roast we are having for dinner came from. And so far, I love the taste. (Can't wait to try that lean bacon!) But financially, I am leaning towards the side that this is not worth it. We are not made of gold, and when you budget finances you have to prioritize. Like saving up for a vacation instead of eating out. Or instead of having a Starbucks, putting that change into the new camera fund. :-) And so far, I choose to buy organic celery and lettuce at the store, but not organic meat. I know that almost all the celery that is non-organic is pretty bad for you, but I also know that when there is a good sale I can get pork for $1.50 a pound. I have to make these choices. I really wish it was cheaper to buy organic or homegrown meat, but at this point in history it feels like it can cost and arm and a leg.

I am really glad we did this; it was fun to get Piggy Updates from my friend and see the entire process from animal to table. Someday, I hope to be able to make the decision to do it again. Maybe a bovine called Hamburger?
My Musings